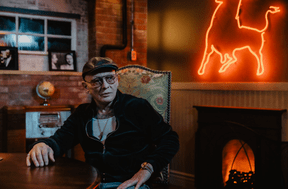 “He was a real man’s man.” To hear Sammy “The Bull ” Gravano talk about deceased mobster Johnny “Keys” Simone, you’d think the two men were best friends. The two never met before the day that Sammy set Simone up to be murdered. Johnny Keys was to be just another victim but his honorable behavior before his death shocked Sammy to his core.

Angelo “The Gentle Don” Bruno had been leading the family since 1959. Bruno lived up to his nickname as one who preferred diplomacy over violence. By the late 1970s, Bruno’s underlings had become very frustrated that New York mobsters were able to deal drugs in their territory but they were not. They blamed Bruno for allowing it.

Family consigliere Anthony “Tony Bananas” Caponigro, Simone and a soldier named Frank Sindone began plotting Bruno’s demise. They let some members of the Genovese Family know what they were going to do, and they assumed that they had approval. On March 21, 1980, Bruno was sitting in his car when he was gunned down from behind.

This murder set off a series of killings and street wars that would see bullets flying and bombs detonated for years. First it was Tony Bananas who was called in for a sit down where he was viciously bludgeoned and then killed. The Genovese guys had played him. Johnny Keys knew they were in an all out war and he and his crew always were armed and ready to kill.

The bosses in New York were outraged that this group of lower level mobsters killed a boss without commission approval. They all agreed that everyone involved needed to be killed for the infraction. Johnny Keys was a top shelf mafia hitman with a crew of shooters. It was not going to be easy even for the commission to have him killed.

Paul Castellano knew exactly who was dangerous and clever enough to get the job done, Sammy The Bull. Gravano, just a soldier,  jumped at the opportunity to do an important job for the bosses. He and his crew began surveilling Johnny Keys looking for any opportunity to kill him. All they came up with was that Keys and his large crew hung out at a pizza joint in New Jersey.

Sammy decided that it was too dangerous to get into a shootout at the pizza place. He decided that Simone had to be extracted to get the job done. He set up a meeting with Simone under the guise of being Castellano’s “punk message boy”. He told Simone that Castellano wanted him to win the war and that they would back him as boss. Paul just wanted to meet with Simone.

Johnny Keys was a savvy old gangster but he fell for the trick, agreeing to set up a meeting with Paul. Sammy made arrangements to pick up Simone at the Sky View Country Club in Washington Township, New Jersey. It was a massively dangerous move for Sammy to go into Simone’s territory but the risk paid off.

He must’ve had some doubts but Simone knew this might be his only chance to actually stay alive. They made a plan to meet the next day, September 19, 1980. Johnny Keys agreed to show up unarmed and drive with Sammy to go meet Paul. At the country club, Simone was snatched by several men and thrown in the back of a van.

He was not supposed to be armed but was carrying a gun that he tried to pull before getting overwhelmed. Simone understood this kind of situation all too well. He had been on the other side of it many times but now it was his turn to die. The doors closed and the van quickly sped off. They wrestled the gun away from Simone and tied him up.

Sammy recently opened up about the murder on his podcast. Here is the link to that episode on youtube. It’s a long 42 minute video and Gravano becomes emotional more than once.

Shortly after the initial violence of the incident ended, Simone was able to start making an immediate connection with Sammy, who was watching over him with a gun in his lap. He complimented Sammy for accomplishing his dangerous mission. He told Sammy that he was a hitman’s hitman” who killed over 50 men in his life.

As Simone continued to engage him, Gravano became fascinated by how honorable Keys was about the situation. He knew he was going to die but at no time showed fear or begged for his life. Instead he calmly and respectfully conversed with Gravano as the van headed to Staten Island, where they planned to kill Johnny Keys Simone and dump his body.

When they came upon a toll booth, Sammy let Keys know that he would have to hold him down and cover his mouth. Keys understood and offered zero resistance. Sammy was amazed. Keys was wise enough to know that would not help him and he wasn’t even going to try. Sammy knew then that this guy understood La Cosa Nostra better than anyone he’d ever met before.

Because one of the guys had made a mistake grabbing the car keys, they were forced to wait after getting to Staten Island. They had to get word that their car was taken out of the country club grounds before killing Keys. According to Sammy, this process took about 13 full hours. Much of this time was spent with him and Keys sitting together in the back of the van talking.

At one point, he asked Sammy to give him his heart medicine because he didn’t want to die of a heart attack. He told Sammy if he had to go, he wanted to die like a man. Sammy gave him his medicine. Then Johnny Keys asked Sammy to take his shoes off before the killing. He had been telling his worried wife for years that he would die with his shoes off, comfortable.

Sammy was touched by this request. He promised Simone that he would do just that for him. As the time passed and he got to know Simone, he began to feel an overwhelming amount of guilt. He was about to kill the epitome of the life he knew, La Cosa Nostra. He even apologized and explained to Simone why, and Simone for his part understood.

After what almost seemed like days of waiting, Sammy got word that the crew’s other car was safely away from the country club. He could now carry out the hit. After spending hours with the most standup mobster he’d ever met, he was feeling terrible about killing him. But Sammy had no choice, this was commission business and if he didn’t do it, he would be dead.

They drove to a wooded area to finish the job. No one was happy about doing this job, they had to go through the motions. When Sammy saw one of his guys dragging Simone out of the van, he told him “get your fucking hands off him!” Then he asked Simone if he wanted to slide out of the van by himself, which Johnny Keys calmly did.

Simone had one last request before his death on top of the request to take off his shoes. He asked Sammy that whoever pulled the trigger on him, please make sure it’s a “friend of ours”. He wanted to be killed by a made man. Sammy granted the wish and picked his partner Louie Milito to do the shooting.

Keys asked where they wanted him to go. He was instructed to walk a few feet into the woods. Then his shoes were taken off and left next to the body after Milito killed him. The feeling in the van driving away was one of sadness. As far as Sammy was concerned, he would have rather seen Simone named as new Philly boss, but it was only business.

The killings would continue. Sindone, the third conspirator in Bruno’s killing was murdered 2 months later. The Philly family went into a virtual civil war. Their next boss Phil “Chicken Man” Testa was blown up in March 1981. This opened the door to Nicodemo “Little Nicky” Scarfo taking over. He would be the most violent and sadistic boss Philly ever had.